UV tests. How good are they for bacteria detection.

UV light can be used for a multitude of purposes.  The less intense (lower frequency UV can be used as a diagnostic tool).  More intense energy UV radiation (high frequency UV) can be used to alter bacteria. The three main types of UV rays are UVA, UVB, and UVC. Because UVC rays have the shortest wavelength, and therefore highest energy, they are capable of killing bacteria and viruses, also called pathogens. UVC light has a wavelength of between 200 and 400 nanometers (nm). It is highly effective at decontamination because it destroys the molecular bonds that hold together the DNA of viruses and bacteria, including “superbugs,” which have developed a stronger resistance to antibiotics. But UVC can quickly impact and effect human skin and other tissues.

Are there cheap UV tests to view bacterial contamination? Yes if the bacteria (like the coliform bacterium) can fluoresce or be made to fluoresce – but such tests are not universal or reliable indicator of Bacterial Contamination?

Many natural substances do glow under UV: semen, urine, mineral oil, earwax, perspiration.  Pest control companies use UV light to detect rat feces and urine which also fluoresce under UV.  Some bugs can be detected.  Cells can be stained (decorated) with salts or reagents like tetrazolium chloride (CTC) and salts. 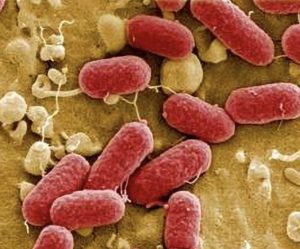 For UV fluorescence radiation must be absorbed at a certain wavelength and reemitted at another (visible wavelength).  A recent study swabbed a number of surfaces in critical healthcare situations and looked at levels of bacterial contamination of surfaces that fluoresced under UV versus those that didn’t https://rectofossal.com/bacteria-glow-dark/. “.. colony densities were significantly higher in non-fluorescing areas versus fluorescing areas! It was also found that the color of fluorescence may determine the level of sanitation necessary to properly clean a room. Therefore one cannot argue the fact that surfaces that do not fluoresce under UV are clean or free of bacterial contamination i.e. lack of fluorescence is not indicative of the absence of bacterial contamination.” Fluorescence is diagnostic technique – bacteria can also be stained or genetically engineered so they will fluoresce.  Fluorescent biomolecules such as flavins and the amino acid tryptophan do exhibit fluorescence. These are often present in bacteria and other living cells but fluorescence is very specific: a particular molecule will absorb at a particular wavelength and re-emit at another, specific wavelength –   molecules like tryptophan if buried in a cell or its membrane might not show adequate fluorescence to be noticed at least without sensitive sensors.

Riboflavin (Vitamin B2) reliably emits at a bright green 560nm when exposed to a broad spectrum of UV and bacteria are rather partial to flavins – as are we all: they are essential for metabolism. This is the molecule most UV systems easily detect.

What about UV to kill bacteria:  We do not recommend it.  Intense high frequency UV radiation can kill bacteria, but it can cause skin and other cancers.