With food-borne diseases on the rise1 according to the CDC, proper sanitation has never been more important. Steam is a cost-effective manner of quickly treating all types of surfaces clean from the nanoscale of viruses to the larger scale of grease. SaniZap’s quick startup time and high mobility allow it to be used and put away before other steam generators have warmed up. Our revolutionary, patented technology allows the MightySteam® to continuously produce 1112°F steam in about a minute. 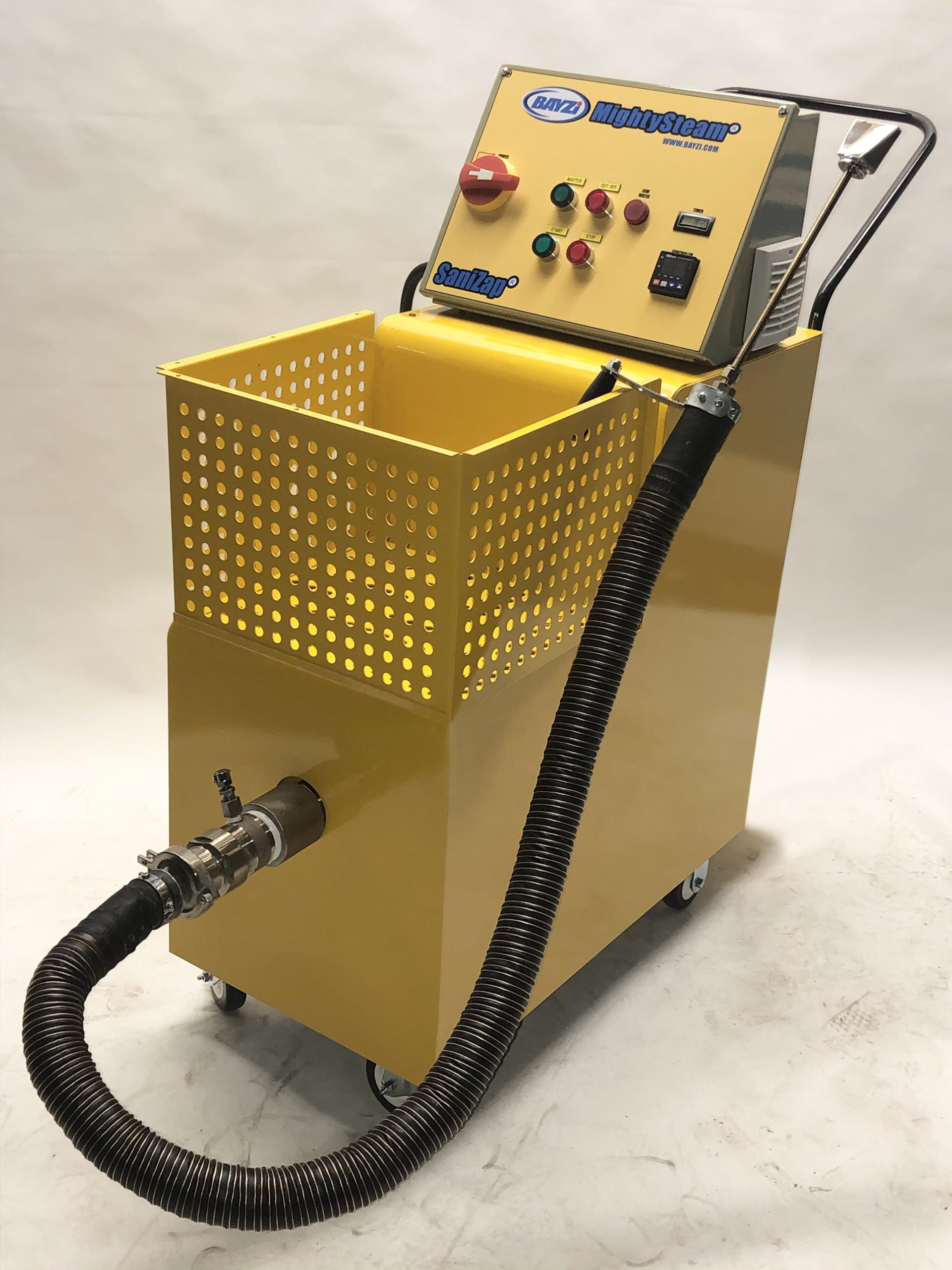 Steam Cleaning Studies including Historical Ones.

MightySteam® doesn’t need the help of chemicals to clean, it uses pure, clean steam as the agent. The MightySteam’s high-temperature steam can impact cleanliness of surfaces by using its intense thermal energy. More than likely fewer chemicals are needed.

MightySteam® cleans with lower resource consumption than traditional cleaning agents. SaniZap® utilizes only 1kW- 4.5 kW  of power, compared to steam boilers that can consume 7-15kW or more of power. The SaniZap® superheated steam is dry, leaving behind just a trace amounts of clean water when used properly.   Sometimes the use of a good wipe (towel) is required after the steam treatment but most often it is dry.

The SaniZap® steam technology is expected to significantly benefit Sanitation.

For sometime now steam has been recognized as the king of sanitation. Today of course rapid high temperature steam machines are available which were not avaibale in the past.  The difference is that the speeds of bacterial elimination are much higher now.  Regardless it makes a useful  read to see what was known.

Several reports (studies2) utilizing 248°F  superheated steam have been published to test the effects on a variety of common bacteria.  As the steam temperature rises that contacts microbes, the time needed to kill bacteria decreases (thermal kinetics often have an exponential impact).  In the study2, 18-hour broth cultures of Enterococci, E. Coli, CNS, and Staph aureus were used. Each culture was placed in one of 6 sterile petrie dishes. Each plate, minus the control, was exposed to 1,2,3,4 or 5 seconds of superheated 248°F  steam. After being exposed to the steam, all plates were cultured for 48 hours at 99°F (37°C), then colony counts were performed.

The table above illustrates that minimal colonies existed in the dish treated for 1 second, and no colonies existed in any dishes treated at 248°F (120°C) for 2 seconds or longer. This is compared to the control dish that featured over 1000 colonies for each type of bacteria except for Staph aureus, which had between 100-1000 colonies when left untreated.

The study also entailed domestic applications of steam. Common household areas including a toilet seat, toilet bowl rim, sink basin, sink faucet, bathtub, shower tile/grouting, and a showerhead.  The same 248°F  steam for this experiment and allowed 30 seconds of total cleaning time for each object. Surfaces were swabbed prior and post cleaning and were incubated for 48 hours at 99°F (37°C) to allow for colony growth.

A 30 second 248°F (120°C) steam treatment in this experiment was shown to be from 97-100% effective at killing micro-organisms. The highest bacteria survival rate of 3% was found on the shower tile/grout. On other surfaces, less than 1% of bacteria remained after receiving steam treatment.  With higher temperatures, the efficiency is expected to increase.

University of Washington’s Odegard Library, used by up to 15,000 students each day, conducted a trial comparing a superheated steam cleaning system and their existing cleaning methods. During the six week trial, custodians used a superheated steam generator to clean and sanitize restrooms, including tile, grout, walls, baseboards, plumbing fittings, and fixtures. The time took and cleanliness factors were recorded before and after cleaning, then compared to their existing cleaning routines. Superheated steam took on average 42.5 minutes per restroom, compared to 46 minutes for the existing program. Time savings were commonly attributed to less bending, scrubbing, and downtime while waiting for traditional chemicals to disinfect surfaces  After cleaning, germ hot spots were measured. Superheated steam cleaned faucet handles and paper towel dispenser handles had 1/10th as many germs as when cleaned with traditional methods. Also to be considered are the less obvious benefits of steam over traditional methods, such as less exposure to chemicals, fewer chemicals to purchase and higher worker morale due to improved efficiency.

A test conducted at the University of Washington’s Odegard Undergraduate Library, which is used by as many as 15,000 students daily, provides evidence of the benefits of a specialized steam vapor system used by trained custodians.

Over six weeks, custodians used the system to deep clean and sanitize restrooms (including floor tile and grout, wall areas, baseboards, fittings, and fixtures). Cleaning times and degree of cleanliness were recorded and contrasted with traditional cleaning methods. Cleaning time was reduced (42.5 minutes vs. 46 minutes) with the steam vapor system. Custodians attributed the time savings to less squatting and stooping to clean hard-to-reach places behind toilets, and under sinks and urinals. With no residual water on floors, drying time also was reduced.

Swab tests compared the degrees of cleanliness of the two cleaning methods. Steam cleaning resulted in cleaner fixtures and surfaces. Steam-cleaned faucet handles and towel dispenser handles, for example, were more than 10 times cleaner than those cleaned with traditional methods. The steam vapor method also eliminated workers’ exposure to chemicals and resulted in a “pride of accomplishment factor” for the custodians.

High-Temperature steam is a known antimicrobial heat agent.  It appears that bacteria begin to die when exposed to 248°F (120°C).  The rate is very slow at this temperature – the rate appears to increase with temperature of the steam. At 200°Cand above  the antimicrobial rate is acceptable.  The SaniZap® deliver a highly effective up to 1112°F (600°C) steam and versatile wands.  The SaniZap® is a good addition for any facility that requires a clean working environment, including hospitals, laboratories and food handling plants. The SaniZap® offers quiet operations and the highest steam temperatures available in a portable steam generator.  These are new steam jet spray temperatures and it is expected that many more than the studies discussed below will become available over time.

With MightySteam® there are no hard particles or ice particles that impinge on the surface being cleaned.  No chemicals either.  So no erosion or spoilage when done properly.

Steam as a Sensitive-Environment Cleaning Agent

With a rapid startup time, quiet operations and low-velocity steam, the SaniZap® can operate in most environments without substantial process impact. With a highly controlled output, the MightySteam® can minimize the risk of cross-contamination resulting from errant over spray. The MightySteam’s steam is also strong enough to quickly contact doorknobs, tables, counters, and other frequently contacted surfaces.  Please see pictures below of steam cleaning of food filters within a few minutes. 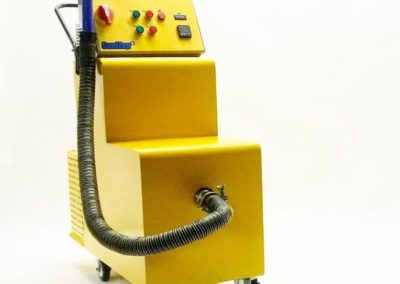 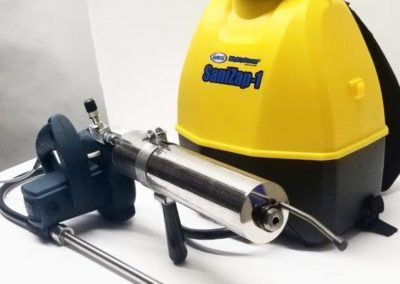 SaniZap-1-HS3 at an angle FINAL 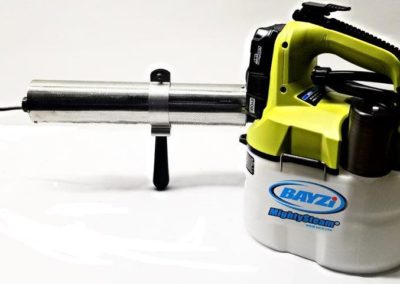 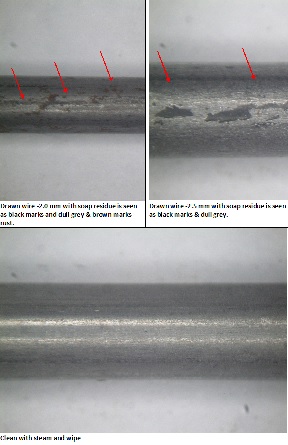 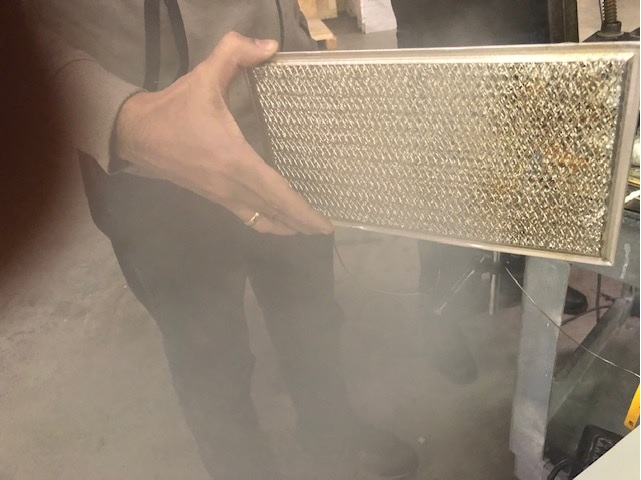