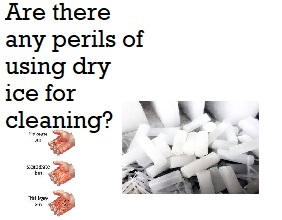 What are the perils of using dry ice for cleaning?

Here is what we found in the literature:

As dry ice melts, it turns into carbon dioxide gas (a process known as “sublimation”) – this is always present in low concentrations in the environment so unless one uses a large amount it may not contribute that extensively to the greenhouse effect.  But it all adds up.  Dry ice is sol­id car­bon diox­ide. It forms at a tem­per­a­ture of -78.5 °C (-109°F).   At room tem­per­a­ture, dry ice tran­si­tions rapid­ly from its sol­id to its gaseous state. However, it can pose a problem when it is released in a small or unventilated space, as it lowers the amount of “normal air” in the area. This in turn creates an oxygen deficient environment which can pose the following health risks to both humans and animals:

As carbon dioxide gas is both colorless and odorless, it cannot be detected unless a specific alarm sensor is in situ – so if dry ice melts in uncontrolled conditions and in an unventilated space, anyone or any animal in the immediate area could be at real risk to their health. If the oxygen in the area reduces to any less than 10%, unconsciousness without warning is a real risk. Once this has happened, the individual may then suffer convulsions and eventually these conditions will be fatal if no help comes.  https://www.health.ny.gov/publications/7081/

The levels of CO2 in the air and potential health problems are: (https://www.dhs.wisconsin.gov/chemical/carbondioxide.htm)

Did you know a lot of energy goes into making dry ice?

Prolonged exposure to dry ice can cause severe skin damage through frostbite, and the fog produced may also hinder attempts to withdraw from contact in a safe manner. (https://en.wikipedia.org/wiki/Dry_ice)

SaniZap for odor and grease removal

A review of the duration that pathogens persist on a surfaces

Conclusion: The most common nosocomial pathogens may well survive or persist on surfaces for
months and can thereby be a continuous source of transmission if no regular preventive surface
disinfection is performed.

Main Points:   Most gram-positive bacteria, such as Enterococcus spp. (including VRE), Staphylococcus
aureus (including MRSA), or Streptococcus pyogenes, survive for months on dry surfaces. Many gram negative
species, such as Acinetobacter spp., Escherichia coli, Klebsiella spp., Pseudomonas aeruginosa,
Serratia marcescens, or Shigella spp., can also survive for months. A few others, such as Bordetella
pertussis, Haemophilus influenzae, Proteus vulgaris, or Vibrio cholerae, however, persist only for days.
Mycobacteria, including Mycobacterium tuberculosis, and spore-forming bacteria, including Clostridium
difficile, can also survive for months on surfaces. Candida albicans as the most important nosocomial
fungal pathogen can survive up to 4 months on surfaces. Persistence of other yeasts, such as
Torulopsis glabrata, was described to be similar (5 months) or shorter (Candida parapsilosis, 14 days).
Most viruses from the respiratory tract, such as corona, coxsackie, influenza, SARS or rhino virus, can
persist on surfaces for a few days. Viruses from the gastrointestinal tract, such as astrovirus, HAV,
polio- or rota virus, persist for approximately 2 months. Blood-borne viruses, such as HBV or HIV,
can persist for more than one week. Herpes viruses, such as CMV or HSV type 1 and 2, have been
shown to persist from only a few hours up to 7 days.

What if the Pandemic is just a trial run

An interesting article in NY Times

(may require subscription to open)