The History of Hygiene and Sanitation

The Human Right to Water and Sanitation was recognized by the United Nations (UN) General Assembly in 2010. Sanitation is a global development priority.  The estimate in 2017, 4.5 billion people currently do not have safely managed sanitation.
History of Sanitation WHO document
A history of Hygiene in UK is given here.   A few choice excerpts are given below.

1750 – A letter from Lord Chesterfield to his son urges the use of a sponge and warm water to scrub the teeth each morning. The recommendation of using one’s own urine in France was widely flouted by Fouchard, the French dentist. Gunpowder and alum were also recommended.

1834 – The 1834 London Medical and Surgical Journal describes sharp stomach pains in patients with no evidence of disease.  This led them to believe “painter’s colic” was a “nervous affection” of the intestines occurring when lead “is absorbed into the body”.

1847 – A physician called Ignaz Semmelwis found childbed fever occurred in women who were assisted by medical students. He found students who assisted in childbirth did so after autopsies. After instituting a strict hand washing policy, deaths dropped by 20 fold within 3 months.

1854 – In mid-18th century England, outbreaks of cholera led to an epidemic. A physician called John Snow observed that cholera seemed to spread via sewage-contaminated water. This was mostly noticed around a water pump in Broad Street, London. John removed the pump handle and the spread was instantly contained.

1858 – Hot weather struck the capital in 1858, drying up the River Thames and leaving pure sewage and other wasted piled up and exposed. This was the start of ‘The Great Stink’, forcing Parliament to close for the day and eventually initiating a reform of the sewerage systems and cesspits.

1861 – The modern flushing toilet. Thomas Crapper didn’t invent the flush toilet but is understood to have made major contributions towards its development by implanting a modern septic system that pumped soiled waters out of the city. However this particular subject is still heavily debated.

1920* – Lysol was sold as a genital disinfectant and birth control method. Lysol ads proclaimed a host of benefits for every gynecological need, and was the leading form of birth control from 1930 to 1960. Lysol is a poison that can cause burns and itches after the first drop.

*Source https://en.wikipedia.org/wiki/Lysol.   “The first Lysol Brand Antiseptic Disinfectant was introduced in 1889 by Gustav Raupenstrauch to help end a cholera epidemic in Germany. The original formulation of Lysol contained cresols. This formulation may still be available commercially in some parts of the world. Formulations containing chlorophenol are still available in the United Kingdom.In 1911, poisoning by drinking Lysol was the most common means of suicide in Australia and New York. One of the active ingredients, benzalkonium chloride, is highly toxic to fish (LC50 = 280 μg ai/L), very highly toxic to aquatic invertebrates (LC50 = 5.9 μg ai/L), moderately toxic to birds (LD50 = 136 mg/kg-bw), and slightly toxic (“safe”) to mammals (LD50 = 430 mg/kg-bw)”.

A list of important references compiled by CDC for information on antimicrobial cleaning/sanitizing-cleaning. 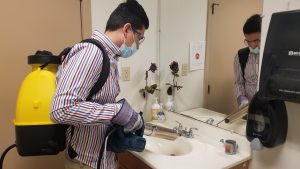